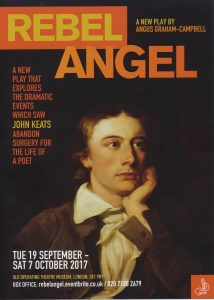 Angus Graham Campbell’s play Rebel Angel ran for a highly successful season at the Old Operating Theatre St Thomas’s Hospital, Southwark during September-October 2017. The play tells the story of Keats’s decision to quit medicine for poetry, and is based mostly in his Guy’s Hospital years 1815-1817 with scenes that glanced back to his early life. The story unfolds in the well of the Old Operating Theatre, with the audience sitting or standing on the tiers originally occupied by the watching (and occasionally fainting) medical students. There were spirited performances by Jonny Taylor as Keats and Peter

Broad as ‘Billy’ Lucas the hapless surgeon and as Richard Abbey, Keats’s guardian. Especially powerful were the scenes of confrontation between Keats and Abbey over abandoning medicine for poetry. It is hoped that the play will continue with a new season in Rome.