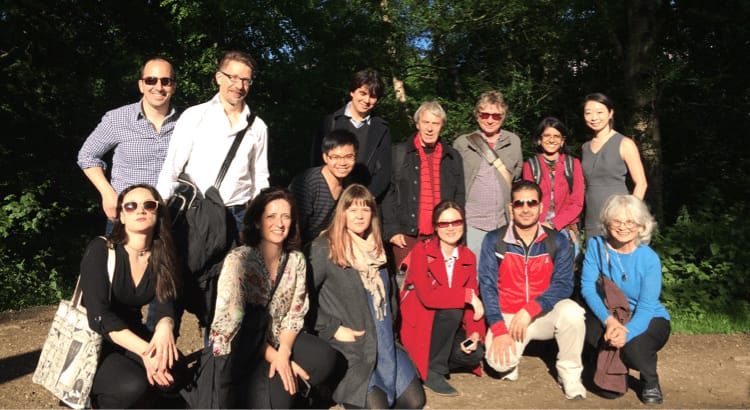 John Keats, 1817: Moments, Meetings, and the Making of a Poet

Sarah Wootton writes: The fourth bicentennial John Keats conference (19-21 May), and our third in the glorious surroundings of Keats House in Hampstead, was another success. The balance between familiar and new faces proved conducive to intellectually-stimulating and convivial debates. The conference is firmly established as an annual Romantics event and is a truly international occasion – over half of our 26 speakers came from outside the UK. What emerged over the course of the conference was the value of revisiting Keats’s poems of 1817, not simply as a foreshadowing of later writings, but as a literary and cultural moment in and of themselves. The various and illuminating readings of his life, works, and influences during this pivotal year – from Professor Theresa M. Kelley’s inspired exploration of scale and Professor Kelvin Everest’s keenly observed and thoughtful engagements with locations and dislocations to Professor Greg Kucich’s masterly and entertaining ‘Cockney’ reading of Endymion – provided ample evidence of a poet already producing works of enduring significance. As the conference came to a close, our thoughts turned to the exciting prospect of the 1818/2018 bicentenary events.

Richard Marggraf Turley writes: A conference focused on ‘meetings and moments’ in Keats’s life in 1817 provided plenty of both for the delegates of this, our fourth bicentenary gathering. As for meetings: like Endymion himself, an international cast of Keatsians ‘long travers’d to and fro’, from all corners of the globe, to convene in glorious weather on the lawns of Keats House, Hampstead. Moments, too. Perhaps one that will live long in the collective conference memory arrived with a dull thud in the central aisle of the Nightingale Room, followed by a cry of ‘Oh, my God! Is he dead?’, as sleep, that ‘soft closer of our eyes’ (aided, perhaps, by Bacchus), claimed one of the delegates during a warm afternoon panel session. As in previous years, the papers were of the highest standard, and offered an engaging mix of themes and approaches.

The conference rubric drew papers from the ‘hoary majesty’ of eminent Keats scholars as well as from a gratifying number of PhD students, whose exciting new work and innovative methodologies amply demonstrated that Keats and his circle remain a focus for some of the most demanding and rigorous research in Romantic Studies. The Keats Foundation’s bicentennial conference is unusual in that it is welcoming to, and pleased to attract, not just academic delegates, but many independent scholars, Keats lovers and members of the public. This precious mingling gives the annual event its distinctive character, and over the past few years has contributed significantly to the conference’s status as a firm, much-loved fixture in the Keats calendar.