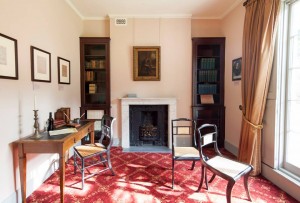 Over the past year the team at Keats have been working hard behind the scenes to develop new interpretation to bring Keats’s Hampstead Home to life. In May, Hampstead resident and Keats enthusiast Nancy Dell’Olio launched our new displays with a call for children to be taught how to write proper love letters in school! A highlight of the new displays is Keats’s letter to Fanny written in March 1820. Complaining that consumption has made him a ‘poor prisoner’ in his home, he can only imagine the lips of his lover, which he calls ‘the dearest pleasures of the universe’. The letter is displayed in a new showcase in Fanny’s room alongside her engagement ring, a miniature portrait and the pocket book which Keats gave her as a parting gift before leaving for Rome. A new audio point allows visitors to listen to recordings of selected love letters and, of course, ‘Bright Star’.

The refurbishment has had an impact throughout the house. In Keats’s parlour, books which belonged to Keats are on display for the first time in many years. These include Keats’s illustrated copy of Milton’s Paradise Lost and his copy of Burton’s Anatomy of Melancholy, with its poignant annotations in the section on love-melancholy. First editions of Keats’s books are also displayed, and in Charles Brown’s parlour a new showcase explores the reception of Endymion. More broadly, this room is themed around ‘Friends and critics’, emphasising that Keats did not work in isolation but relied on the support of friends such as Charles Brown, Charles Wentworth Dilke and Leigh Hunt.

An overarching aim of the reinterpretation has been to use the collection to tell more of Keats’s story, and to make this enjoyable for a wide audience, including families, students, general adult visitors and Keats enthusiasts. To this end, we have aimed to subtly layer in text, film, audio and interactivity throughout the rooms, without detracting from the unique atmosphere. We have also introduced Keats’s poetry into the house through sound recordings, reproduction manuscripts and quotations. A new display in the Brawne Room examines Keats’s medical training and features his Guy’s Hospital notebook alongside medical instruments of the time, which are on loan from the Science Museum. Although we are yet to finish evaluating the new displays, the responses so far have been very positive and visitors are spending longer in the house.

Alongside this project, we continue to run our programme of workshops, poetry performances, talks, film nights and monthly family days. At the Keats Festival in June, we were delighted to welcome Michael Rosen, former Children’s Laureate, as our new Poet in Residence. Michael will be creating new work inspired by Keats House and will deliver events for adults, families and schools over the next year. Details of the full events programme can be found at www.cityoflondon.gov.uk/keats.