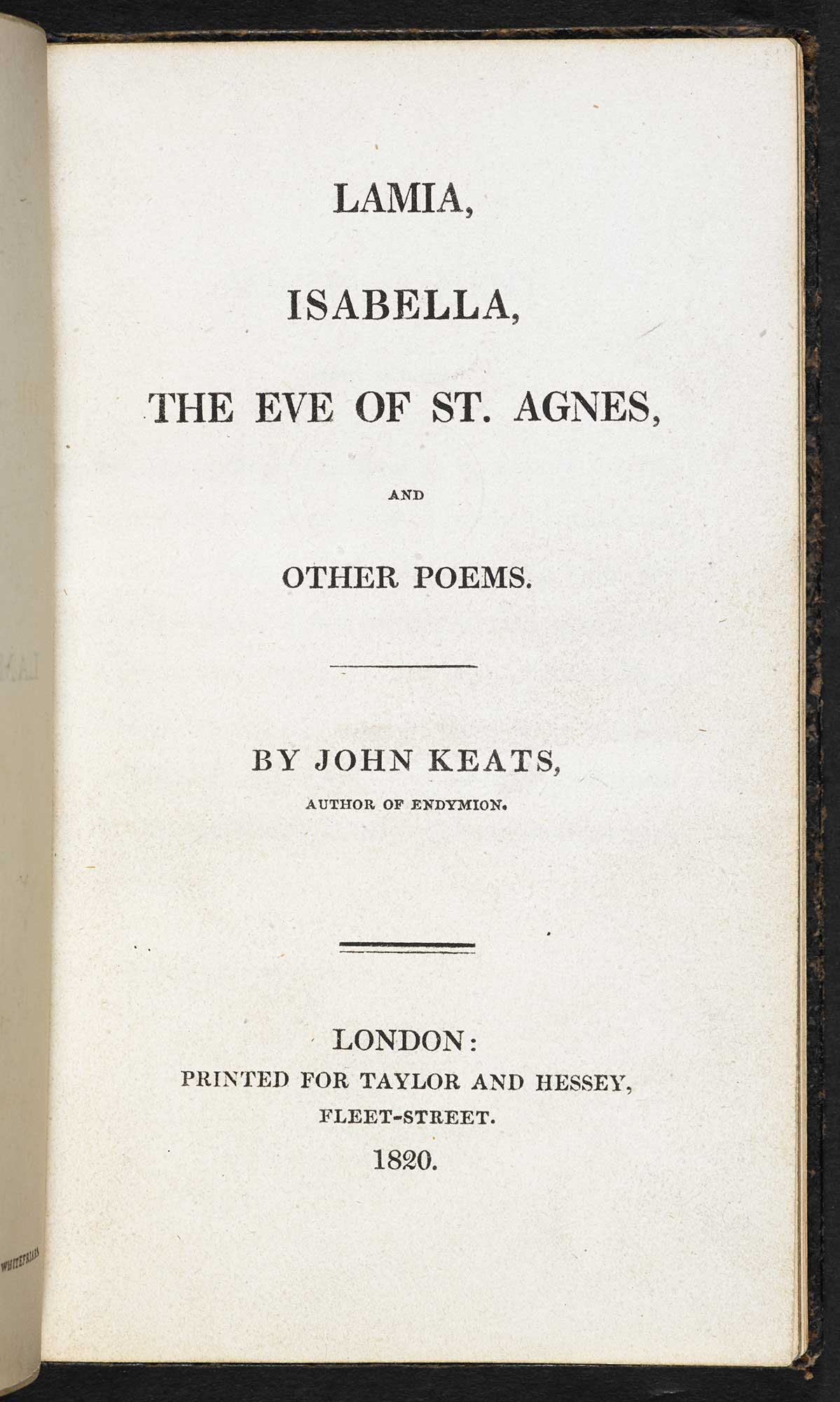 200 years ago, on Monday 26June, the Morning Chronicle announced as ‘just published’ ‘LAMIA, ISABELLA, the EVE OF ST. AGNES, and other Poems. By John Keats, Author of  “Endymion”’. Those narrative romances had been selected to begin the book, and ‘other Poems’ included  the 1819 odes but not ‘Ode on Indolence’. That poem’s moment of gleeful self-vindication had passed, but its fruits were now apparent in the full list of contents:

The Eve of St. Agnes

Ode to a Nightingale

Ode on a Grecian Urn

Ode (‘Bards of passion and of mirth’)

Lines on the Mermaid Tavern

‘Lines on the Mermaid Tavern’ is Keats’s  earliest poem represented here, ‘To Autumn’  his most recent. The book’s opening group of three romance narratives culminates with The Eve of St. Agnes, a midnight escape, and old Angela ‘palsy-twitch’d’ and dead.  Next follows  ‘Ode to a Nightingale’, first of three darkling ventures through landscapes of the imagination, reflecting  that ‘palsy shakes a few, sad, last gray hairs’ and speculating on art’s role in  a world subject to old age and ‘other woe’ hastened by time and change. ‘Ode to Psyche’, concluding in an ‘untrodden region’ tended by ‘the gardener Fancy’, offers a link to  fleeting pleasures of  ‘Fancy’ and the nostalgic, Shakespearean England of ‘Lines on the Mermaid Tavern’ and ‘Robin Hood’. Often said to be the slightest poem in this book, ‘Robin Hood’ announces its outlaw theme in a world where ‘honey / Can’t be got without hard money!’ and in so doing intersects neatly with the poem that follows. Foraging in the same callously material world, the ‘gleaner’ in ‘To Autumn’ is a  representative of all those in whose names  Hunt in The Examiner was calling for a revival of the spirit of Old England and Robin Hood. A note of valediction sounded at ‘To Autumn’’s  close  carries  through  to the forlorn farewells of ‘Ode on Melancholy’ and ‘Joy, whose hand is ever at his lips / Bidding adieu’ (22-3). Keats, knowing himself bound to forsake Fanny Brawne, had intended his book to close here.

That Taylor and Hessey added Hyperion as a final poem destroyed the coherence of the twelve-poem volume, closing with ‘Ode on Melancholy’, that  Keats had projected.  It supplied a fragmentary coda, and tactlessly predicted that the poet would not live long enough to complete his epic in a single volume.[1]  Yet Taylor, Hessey and Woodhouse had acted in his best interests, for with Hyperion Keats’s third volume was evidently a much more substantial accomplishment than  Poems, by John Keats.

Lamia, Isabella, and the Eve of St. Agnes gathers together the extraordinary outpouring of the preceding year and a half in a volume that contains eight of the greatest poems in the English language. With  Lyrical Ballads (1798),  Keats’s third book is one of very few ‘landmark’ volumes in the English poetic tradition. It far surpasses Endymion and  Poems yet, touchingly, it is arranged on a principle Keats announced in his first book; once again,  his  ‘short pieces in the middle’ were written at ‘an earlier period than the rest of the Poems’. Still marking time, Keats was gathering himself and looking forward to what he might yet do.