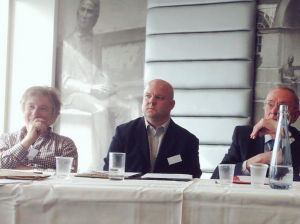 In a marked contrast to the first Keats Foundation conference, immersed in the peaceful suburban aesthetics of Keats’ House, ‘John Keats: Poet-Physician, Physician-Poet 1815-1821’ was set amidst the bustling, high-octane environment of Guy’s Hospital – celebrating the bicentenary of Keats enrolment in 1815. In his opening remarks, Nicholas Roe sketched a biographical cartography of Keats’ London from our vantage point on the twenty-ninth floor of the hospital tower, which heralded captivating views over the city. Using St. Paul’s Cathedral as a marker, it was possible to place both Moorgate (Keats’ childhood home) and Cheapside (where Keats had lodged with his brothers). We were afforded aerial views over the winding streets of Southwark, where Keats would have wondered the ‘jumbled heap / Of murky buildings’ in-between lectures on anatomy, botany and medical practice. Finally, Keats’ later years spent among the ‘coterie of Hampstead’ were traced along the distant green slopes of Hampstead Heath. It is difficult to imagine a more perfect setting for a conference that sought to frame these formative years as integral to the shaping of Keats’ poetics.

The six lectures delivered over the three days were a particular highlight. The opening keynote from guest of honour, Stuart Curran of the University of Pennsylvania, conceptualised non-sensation in Keats’ poetry – a nuanced trajectory considering traditional representations of Keats as ‘sensuous’ poet.   From numbness to pre-anaesthetic excess of sensation, Druin Burch’s (John Radcliffe Hospital, Oxford) lecture on the practices of Keats’ contemporary and (in)famous anatomist, Astley Cooper, made for an (often stomach-churning) account of nineteenth-century vivisection. Damian Walford Davies (Cardiff University) used the ominous cloud of ‘killing breath’ in Joseph Severn’s portrait of the poet on his deathbed to frame his discussion of infection, tracing the ways in which inheritance of the family disease shaped Keats’ ‘tubercular’ poetry. We were offered an insight into the ‘rollercoaster years’ of Napoleon’s exile on the island of Elba, brought to life through the lens of political caricature by Jenny Uglow, and the role of editorial responsibility in preserving Keatsian representations of mourning and melancholia in the 1820 Poems was raised by Bob White (University of Western Australia). Finally, Jeffrey Cox (University of Colorado at Boulder) explored the economics of the Cockney school of poetry; the financial constraints that faced (and, in many respects, governed) young nineteenth-century poets – Keats included.

In total, thirty-nine papers were delivered over a series of twelve panels, investigating a broad range of topics. Beginning with a focus on Keats’ days as apothecary and dresser at Guys, and extending to consider the later poetry and modern re-imaginings of Keats’ work, various modalities of Keats’ multifaceted career were conceptualised over the course of the weekend. It was a privilege to hear papers delivered by both established and emerging Keatsian scholars, and especially those who had travelled from locations all over the world: America, Hong Kong, New Zealand, to name but a few. Engaging and thought-provoking, every panel sparked dialogues of lively debate. 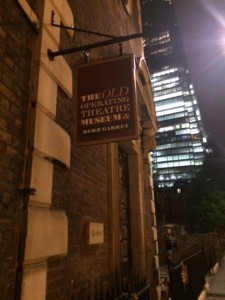 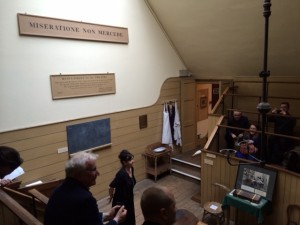 Away from the conference suite, a personal highlight of the weekend was the opportunity to explore the old operating theatre of St. Thomas’ Hospital – a truly unique venue. The room had been walled up in the roof space of an English baroque church for almost a century before its rediscovery in 1956. This hidden gem allowed an insight into Keats’ experiences as a dresser at Guys. As we gathered around the operating table, we were treated to an animated demonstration of pre-anaesthesia surgery and amputation from the museum’s curator, before an evening of discussion amidst the medical curios on display in the adjoining herb garret.

Our second reception was held at The George Inn, London’s only remaining galleried coaching inn, tucked just behind Keats’ lodgings on George Street. The inn boasts its own literary credentials: Charles Dickens is said to have frequented The George back when it was a coffee shop (even earning a mention in Little Dorrit) and it seems unlikely that Keats himself would have failed to find his way there during his student days. The oak panelling and wooden beams of the seventeenth-century public house provided the perfect setting for an evening of lively conversation.